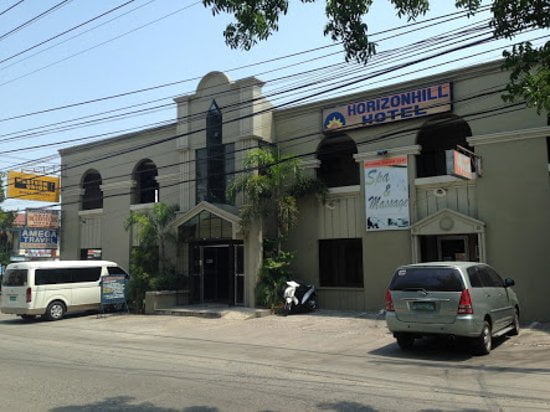 My wife and I are on our annual balikbayan trip and we are in Singapore ready for the return flight.  We were the first ones to the gate because we were there 4 hours early.  Eventually, it got full around there and the flight even left about 15 minutes early.  Our seats to Clark were the same seats we had going to Singapore.  It was a different plane, but the same airline (AirAsia), just the same seats (3B, 3C).  It was a nice flight, but I’m glad it wasn’t very long.  I was already so tired from not sleeping very much at the airport.  I just wanted to get back to Clark, get stamped in and head for the hotel to sleep.

When we arrived Lita got her wheelchair because her hip was still hurting and she just can’t walk very far anyway.  It’s a good thing too because the walk was further than we anticipated.  When we got to Immigration it seems that we got the same guy as we had when we left the Philippines.  I didn’t notice, but Lita did.  I don’t pay that much attention to the guys, but if it would have been one of the lady Immigration Officers, I probably would have noticed.  So this was the same guy that, when he checked our passports upon leaving, noticed it was our last day in balikbayan status.  When checking in he asked me why I don’t get a 13a Visa.  I didn’t really have a good answer for him, except that I didn’t really mind leaving once a year.  Anyway, we got our balikbayan marked in our passports so we are good for another year now.

When we got to the taxi outside, they wanted P500 to go to our hotel.  I thought that was a bit high and complained but I was overruled by Lita.   I thought P400 was the going rate.  Come to find out later that the guy pushing her wheelchair told her that I should not be complaining so much in public.  It could be dangerous.  Well, from my perspective, taxi drivers are always trying to rip off tourists and if you don’t complain things may never change.  I’ll have another example of that in two or three paragraphs.

At the hotel, one of the first things I did was ask the lady behind the counter what the going rate was for taxis to and from the airport.  Her answer?  P400.

We got our room, close to the front, and decided to have a light meal before going to bed.  We were there only 1 night and was leaving early in the morning.  I don’t remember what Lita had, but I had a ham & cheese omelet with extra ham and water to drink.  After we got to the room we crashed and pretty much slept until around 4 am.  We had a wake-up call at 5 am, but, as usual, it was not necessary.

Instead of taking a taxi to the airport, we took our first Grab.  It was way cheaper than the taxis, P150 vs P400.  Definitely something I will check out more in the future, along with Uber.

Upon arrival in Tacloban, we needed to get a taxi to the Grand Tours depot.  One of the baggage handlers asked if we wanted to rent a van all the way to Calbayog for P4000.  We declined.  After we got in the van to go to Grand Tours, Lita asked the driver how much to rent the van for the day.  He said P3500.  So we did.   She had him stop at 4 different places before we got home so all in all it was worth the price.  It was still a long ride though.  I think she ended up paying him P4000 anyway, with the tip.  He did help us out quite a bit, so I had no complaints about it.

When we got back we were so tired.  We both fell asleep shortly after arrival.  I went to sleep first.  Neneng had just changed the sheets on the bed the day before and it was all nice and fresh.

We do have to head back to Angeles/Manila in early November to go to the Embassy.  I’ll have a post on that little adventure also.