[smartads] In case you didn’t read day one, you don’t need to to follow this, but it would help you to understand more.  Here’s a link to it, go ahead and read it, I’ll wait for you here.

Okay, if you are reading this either you already read day 1 or you don’t care too, at least at this time.  I did remember to put little extra tidbits for each picture this time, so just click on the picture to see what I wrote.  So when I left off on the last post, we were still in Catmon and they were talking about a party at 0400 the next morning.  Around 9:00pm we left Catmon and headed for Tambis to get a few hours sleep.  We got a different bedroom than we normally do, but it didn’t really matter to us, especially since we were both so tired.  Bebie opened the windows in the bedroom and I asked if there were screens on them.  There are not any, but she said that there were no mosquitoes.  Okay, she knows the place better than I know it.  We did have an electric fan and a sheet, plus 2 very small pillows.  Like I said, we were tired, too tired to argue, so we just went to sleep.  I don’t know how she sleeps in her room, but there are mosquitoes there.  I had at least 5 bites the next morning.  I just called them the invisible mosquitoes. 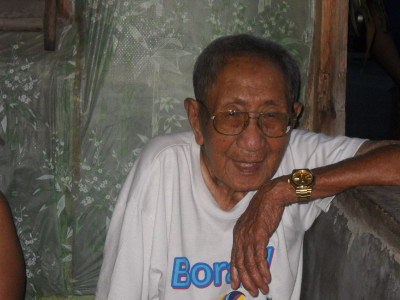 We were up about 0300 and left about 0330 to go to the party.  It actually started on time, 0400.  A group of singers came by and sang songs for Poppa.  I didn’t record it because it was all in Tagalog, but I did take a picture of it. 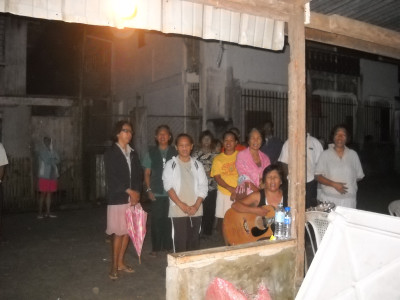 Group of singers for Poppa at party 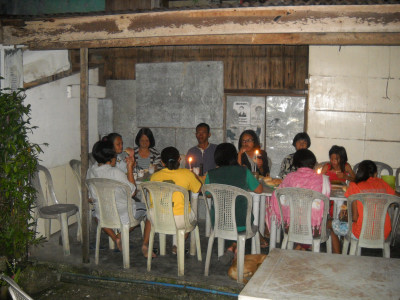 After a little bit of hanging around and a little bit of eating, which is all most of them did, it was time to go to church.  Church started at 0530.  Khany and I waited in the car in front of the church.  I thought it would give me a chance to sleep a little bit more because there was too much yak-yak at the party. 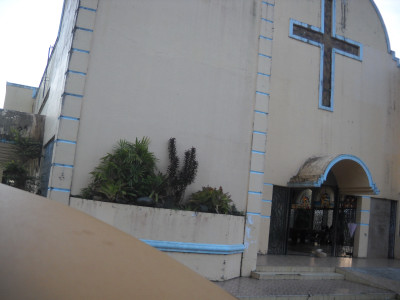 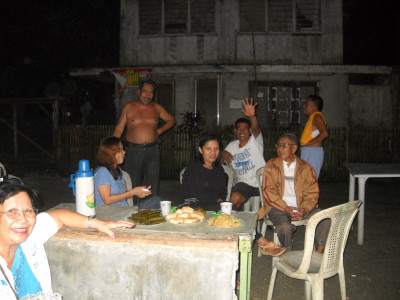 Outside of house in Catmon

After church and a short trip back to Catmon, Lita wanted to go back to Tambis to get some more sleep.  That sounded good to me.  I definitely could sleep some more.  Even if I didn’t get to sleep and I had to be bored, I’d rather be bored alone.  But I did sleep.  I must have been more tired than I though.  While I was sleeping, people went shopping, including Lita.  They bought some vegetables especially for me.

After having some cappuccino for breakfast, everyone at the house, except Lita and I headed back to the party in Catmon.  We planned to go about 2:00pm before the next part of the party started at 3:00pm, I think.  Bebie and Khany came back around 1:30pm and by 1:45 we were all heading back to Catmon.  I can only guess that this is the final part of the party.  Lita doesn’t really know either what’s going on either.

We get there, it’s 2:00pm, it’s SMB time.  SMB is San Miguel beer.  Across the street from the house and down a few feet is a lot where a house will be built.  Right now guys are sitting out there drinking San Miguel.  The handed me a glass and commence to pouring. 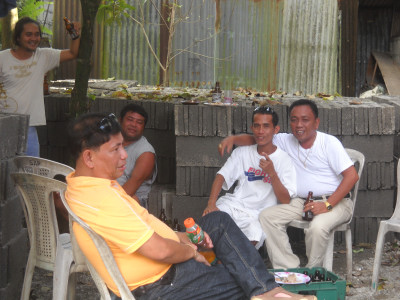 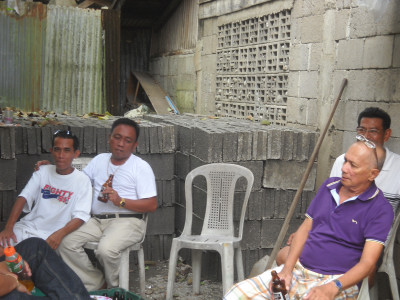 The pen I had to take my notes fell to the floor and just busted all to uselessness.  I gave this young lady P13 to go buy me a pen at the store around the corner.  A different, younger girl came up to me a little later and handed me 2 pens and P2 change.  I just let her keep the P2.  I had to check the pens to see if they worked for such a low price.  So I did check and check, they both worked.  One black, one blue.  In fact they work better than the pens I’ve been buying here in Calbayog for a much higher price.  Maybe I should have gotten more of those pens while I was there.

I figured that while I’m here in the area, I will take some extra pictures to put on a Zamboanga.com site that has all the towns in this area listed, but there is no information for any of them, not even a picture.  I figure the least I can do is put a couple or 3 pictures on there for him.  I’m not allowed to link back to my site on that site, but I am allowed to reference my website, so that’s what I’ll do.  I’ve got pictures of Tambis I (where Khany/Bebie live) and Catmon, but I didn’t get any of Tambis II and Bol0dbolod.  All 4 of them needed pictures at that website.  Oh well, not this time.  Maybe next time, which could be a very long time. 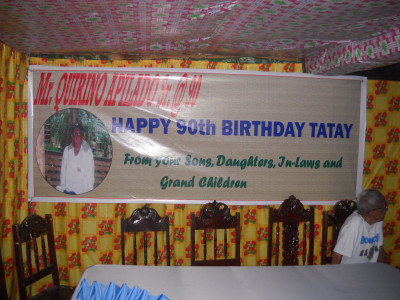 Poppa and his 90th birthday banner 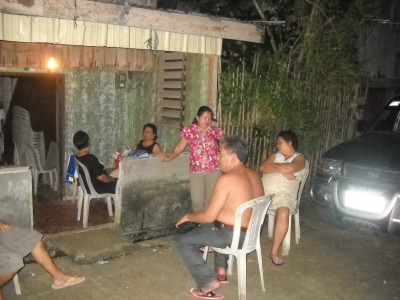 Hanging at the Catmon house

I know people who drink too much usually always say that they are not drunk, but really I wasn’t.  I don’t mind admitting when I’ve drank too much.  No one believed me though and Lita decided that it was time to go back to Tambis, the party was over for me.  She said that, but I know her.  She put it on me, but she was ready to go back herself.  I don’t mind though.  I was ready to go back too.  It didn’t help my cause for saying I wasn’t drunk when I went to close the screen door on Khany’s house and the handle broke.  The handle broke off in my hand and I got cut in 2 places.  Not bad, but there was blood.  Luz (that’s Jun’s wife) was one of the ones that went with us to Tambis.  She’s a nurse and she headed me towards the sink to wash the cuts.  She confirmed my analysis that it was not serious.  In fact, it had already stopped bleeding.  I did go up stairs though and went to sleep pretty quickly.  I didn’t eat much for the day, but I did have quite a few 1/2 glasses of SMB.  It seems that turned out to be a mistake and I sure discovered it the next morning.  It wasn’t a hangover that was the problem either.

Stay tuned tomorrow to see what the actual problem was.

NOTE:  I tried to insert a video here, but it is supposedly too large.  I’m going to have to find another way to get it on the site.

5 thoughts on “Day 2 – Mosquitoes Singing & Drinking at the Party”