[smartads] This is the 7th in a series of 80 Provinces in the Philippines.  I hope to bring out the beauty of each Region of the Philippines by showing the many beauty things that this country has to offer.

Apayao is a landlocked province of the Philippines in the Cordillera Administrative Region in Luzon. Its administrative capital is Luna and founding capital Kabugao. It borders Cagayan to the north and east, Abra and Ilocos Norte to the west, and Kalinga to the south. Prior to 1995, Kalinga and Apayao comprised a single province named Kalinga-Apayao, until they were split into two to better service the needs of individual native tribes in the provinces.

Useless Knowledge:  Gladys (Elvis’s Mom) forbade young Elvis to go swimming or do anything that might put him in danger. What’s more, the two of them conversed in a strange baby talk that only they could understand.

I had to get up at whatever time it was, to go see why Casandra turned into an opera singer this morning.  Even for a baby she is very loud.  Come to find out that she has a good reason for all that noise.  She’s constipated.  So I looked on the Internet for home remedies for taking care of that in infants.  The only ones that we might have the supplies to do here, that I could find, are either a teaspoon of dark corn syrup in her milk once a day or up to 6 oz of apple juice per day.  The also say pear juice or prune juice (this one I know works), but I have not seen either of those last 2 here.  I’m not even sure about the apple juice.  Cathy looked confused when I told her apple juice.  She said she would just buy a couple of apples and get the juice that way.  We have some light corn syrup we bought at Wal-Mart in Texas, but the article says that ‘light’ corn syrup would be useless for this.  We even had to show Cathy the bottle of corn syrup, because she had no idea what it was.

I told Cathy that when she get a little older, let her sing.  She has a good pair of lungs.  She is even louder than her ante Precious.  Opera is seriously not out of the question, if she grows up liking that sort of thing.  I don’t like opera at all, but if she was singing, I’d go.

For breakfast this morning I made, sort of, an omelet again.  I cooked the same ingredients as the omelet yesterday, then poured the eggs that I had scrambled in a little bowl, over the mix.  The results were basically the same except with this one today the mixture was embedded in with the eggs.

Before I did the omelet thing, I talked with one of my goddaughters in Texas via Facebook.  She informs me that she is starting high school this year and she is happy about it.  I didn’t even know she was 14 already.  Some ninong I am, I don’t even know how old my goddaughter is.

Lita has 3 big pots filled with soil that she is going to attempt to grow some Cilantro, sweet cucumbers and Jalapenos.  I sure hope the Jalapenos take anyway.  The cucumbers too because they cost $2.19 per package.  A bit more expensive than most of the others we have.  She needs the cilantro, wants the cucumbers and I want the jalapenos.

It’s 1:19pm now.  I just got back in from out front.  I was talking with Lita about things.  Both of us are wishing we had enough money to build 2 more stories on this house.  We would live on top, Judith and her family would live on the second floor and the restaurant would be the bottom floor (where we live now).  Things would be so much better if it were that way.  There would be less noise, less dust and more fresh air on the 3rd floor.  We’d have a nice balcony to sit on at night and watch the traffic and people down below.  Just a dream that will never come true unless we get a sudden large amount of money, or at least the potential for it.   With the potential we could start planning more.  The restaurant wouldn’t be a gazebo anymore so we’d probably have to change the name.  How about ‘LolyKatfe’?

Useless Knowledge:  A species of sponge called the red sponge can be pushed through a piece of fabric so that it is broken into thousands of tiny pieces. But the animal does not die. Rather, all the pieces reassemble until the sponge returns to its original form. Now, if only humans could do that when they go to pieces!

Precious came by to listen to Wah-Wah.  It’s the video of the kids making an attempt at singing the Philippine National Anthem.  It can be seen on the video page of this website.  Wah-Wah is Joshua.  He is the one that crosses his arms at the end of the video while holding the ice candy.  She likes to listen to it and ‘kind of’ sing along.  Fay is here now to listen, oh and here comes Crystal too.  This will be the last viewing of this video today.  If I let them hang around and listen, they start getting rowdy and messing in things.

Lita is getting her hair dyed today.  Grace is coming by to do it for her.  Just like most women, she doesn’t like all the white showing up in her hair.  Me, well I don’t have much yet, but even if I did, it doesn’t really matter to me anyway.  Of course they say that white hair makes a woman look old and a man look more distinguished.  I think it’s all BS, but that’s just me.

I added some more Philippine recipes.  They are all from www.cooks.com.  There are many recipes, but I only linked the Filipino recipes.  You can wander around to look at the rest of them once you get to the site.

I was looking for something to whip up to cook with the limited ingredients I have available.  I couldn’t find anything, I decided to make up my own, again.  I was digging in the cabinet, in the back of the cabinet, and I found a packet of Knorr’s Chicken Noodle Soup Mix.  I also found some spaghetti in a zip lock.  I have no idea how long it’s been there, but it didn’t taste stale, so I figured it was good enough. 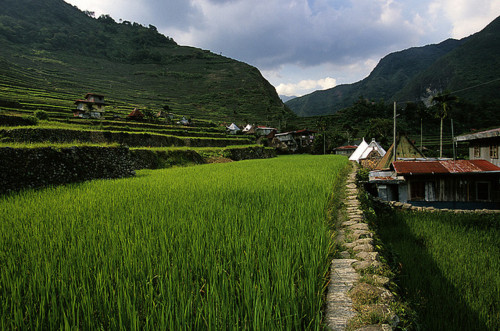 Corners of the World

I cooked the spaghetti normally, drained the water, added the packet of mix and put 3 1/2 cups of water back in there.  It came out pretty good.  I topped it off with some sprinkles of dried cilantro that we have in a container.  I’m thinking that next time I will use the 5 cups of water that the soup mix said I should.  There was enough for 2 meals for me.  We still have some spaghetti in there, so I think I will try to figure out something to do with it at a later time.

I think I am going to start t read some of those Filipino short stories I have been posting on here.  A couple of them look like they would be very good.

Well thanks for reading this far.  Check y’all tomorrow.

Useless Knowledge:  Shark fossil records date back more than twice as far as those of the dinosaurs.

1898 – The imperialist United States begins its propaganda efforts as part of the looming invasion of the Philippines, a day after the infamous Mock Battle of Manila that falsely told the world that the Americans–instead of the Filipinos–defeated the colonial Spaniards in the Southeast Asian archipelago;  Gen. Wesley Merritt proclaims in English, Tagalog, and Spanish that Americans supposedly did not come “to wage war” upon the Filipinos but to “protect them in their homes, in their employments, and in their personal and religious rights”–understood to be contingent, of course, on the natives’ unpatriotic acceptance of the Bald Eagle nation’s colonization of the islands; the proclamation came some three months after American officials first verbally conned Gen. Emilio Aguinaldo into forming an “alliance” and into believing the US will honor Philippine Independence, came five weeks after Gen. Thomas M. Anderson asked for Filipinos’ military cooperation against Spain and after Aguinaldo most stupidly ordered his soldiers “not to interfere” and allow American forces to enter the native territory, came two days after Spain and the US signed the Peace Protocol ‘authorizing’ the latter to occupy and hold the city, bay, and harbor of Manila pending the conclusion of a treaty set to  define the control, disposition, and government of the Philippines, and some six months before the start of the bloody and protracted Filipino-American War (1899-1914).