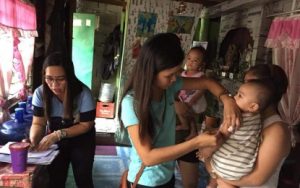 Measles cases in Eastern Visayas continue to surge with the outbreak already claiming the lives of 24 children from January 1 to March 8 this year.

The Department of Health (DOH) reported on Monday that the number of victims rose to 1,080 as of March 8 from 463 three weeks ago.

DOH-Eastern Visayas Assistant Regional Director Exuperia Sabalberino said new victims have been added every day, but the rate of increase has slowed down starting last week, after two months of a massive immunization program.

Of the 24 deaths, six were reported in Tacloban City and four in Palo, Leyte. Areas with two deaths each were Dagami, Leyte; Pinabacdao, Samar; and Calbayog City, Samar.

Areas with one death each were Alangalang, Pastrana, and San Miguel in Leyte; Catbalogan City, San Jose de Buan, and Sta. Rita in Samar. Borongan City in Eastern Samar has one death this year.