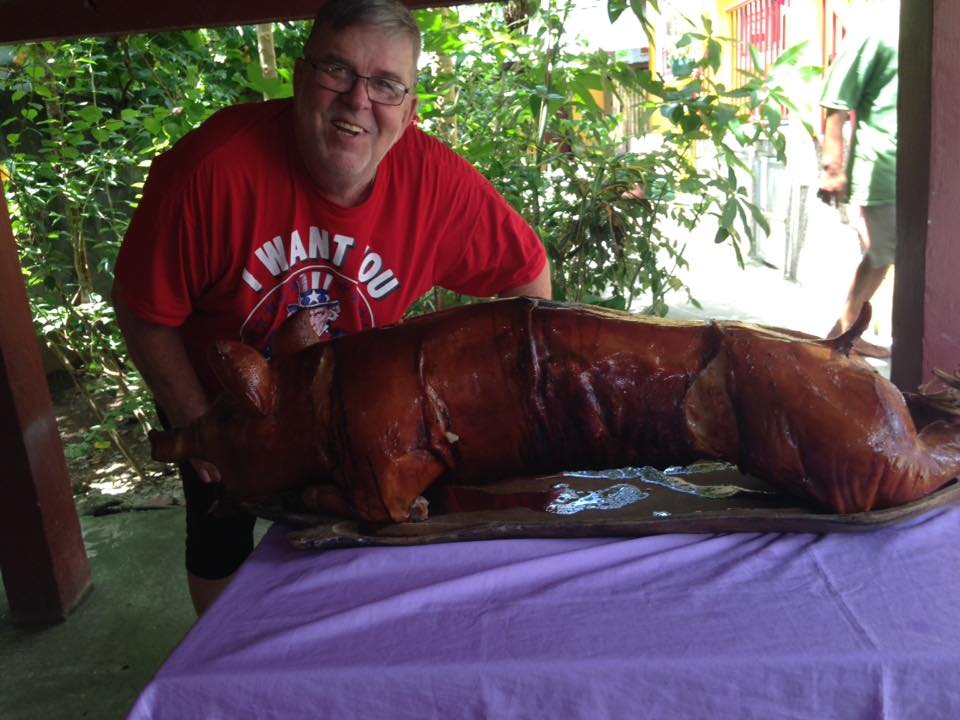 Having a party here is a pretty common thing.  I’m willing to bet that within a year we average about 2 parties per month, including birthday parties. For the month of June, so far, we’ve already had two.  The first one was on June 12th we and it was Larry Jackson’s birthday party, at Larry and Dorie’s house.  It was a very rainy day early, but several people showed up anyway, on time. As for me, well, I went early and got wet.  It wasn’t raining when we left, but I still should have brought an umbrella.  Paul and Ja Ja came by to pick me up.  Lita was once again not feeling well, so she did not go.  Since she wasn’t going, Ja Ja insisted that I ride in the front seat.  I actually need the extra leg room, but it’s her car.  She wouldn’t take “it’s okay, I’ll ride in the back, it’s not too far” for an answer.  She’s just that type of person.

When we got about halfway to the party, it started the raining.  At first it was slow, then on and off, but right about the time we arrived it was pouring. Since one of Larry’s neighbors thought it was funny to put up a gate on what seems to be a public road, we could not drive all the way to the house. We had to park some distance away, I’m guessing about a fifth of a mile, and wait for the rain to slow down.  Finally, it did.  Well, it did until we got about a third of the way into our walking trip to the house.  Since it was Paul’s car, and his wife came with him, they had an umbrella for them.  If you will notice, that’s “one” umbrella.  Being the odd man out in that situation, I’m the one that got soaked.  When we finally got to the house, I got there first, Dorie was nice enough to get me a towel to dry off.  Of course, it stopped raining shortly after we arrived and didn’t rain very much the rest of the party. It was a good party despite the lower number of expats that normally attend.  A couple of people showed up later, after the rains had stopped.

The food they had was catered, as most of their parties are, but they had a little bit different than the usual this time.  Since I am such a picky eater, I normally only eat the chicken at some parties.  Well for this one, I actually ate 4 different items.  Maybe that’s not a big deal for most people, but it is for me.  Of course we had beer to drink, but I didn’t drink very much.  In fact, I think I only drank 1 liter.  I did meet a new expat, his name is Donnie and he is retired Army.  We seem to be getting more retired Army around here recently.  He is a very nice guy and we talked quite often, on and off throughout the party.  I made sure to invite him to the next couple of parties that we are aware of at this time.

We actually stayed at the party for about 5 hours.  I didn’t realize we were there so long because the time went so fast.  I was already dried out by the time we were ready to leave.  Naturally, on the way home, there was very little rain.

The next party would be the next week, on June 18th.  That is for the birthday of cousin Titing.  We would be having it at Malajog Beach, actually just down the beach from Larry and Dorie’s house.  I hoped for no rain and a better turn out of expats.  As it turned out, one of those came true, but another problem developed.  I’ll tell you all about it in my next post.