[smartads] Well I finally got my camera back from Titing.  He was having a problem getting the pictures from his Boracay trip transferred from the camera to his computer.  That has been accomplished now, but it’s too late to take any pictures today.  I will have pictures of another city in the Philippines today and next post will go back to the regular pictures.  I haven’t heard anything from anyone about whether it’d be okay to have these Philippine city pictures every 2 or 3 posts, so I’m assuming that y’all prefer my regular pictures, so that’s what I will do unless I run out or hear anything different.

Useless Knowledge: Back in the 1600s, thermometers were filled with brandy instead of mercury. (they probably changed because people kept breaking the thermometers to drink the brandy, and because mercury is more accurate).

I know that I never did list the top ten things I hate about living in the Philippines, but if I did don’t expect the brown outs or lack of quality beef to be at the top of the list.  Right now the #1 thing that I hate about living in the Philippines (or at least Calbayog) is the phone system.  I can not even call my neighbor, if they have a different phone system, without getting charged for long distance.  An example that just recently happen to me is I needed to call Mar about renting his car with our MJ Car Rental, but he has a Smart phone and I have a Globe phone.  From my understanding, this is not normal throughout the Philippines, just in this area because of some agreement that never got signed between companies to use each others system interchangeably.  I’ll bet that with the Ciriaco Hotel starting to get into full swing and the Gaisano Grand Mall being built here will change all that.  These big businesses can’t have something ‘stupid’ like that holding back their business, so they will be sure that that is taken care of shortly after they are up and running.

I had a problem with the blog today after doing an update.  I finally figured out what the problem was with a little help from Mindanao Bob at:  http://mindanaobob.com.  It was just one of my plug ins, the one for AdBrite was the problem.  I had to deactivate it.  I wasn’t getting rich off their ads anyway.

Lita went to the market again today and bought some pork chops.  Our new helper, whom I will have to call “Mintsy” for right now because neither Lita or I actually know what her name is and it sounds something like that, went with her to the market.  Mintsy told us her name, but we forget, and it’s an unusual name, as are many names here in the Philippines.  I’m not sure how old she is either.  She’s probably at least 16, but I gave up trying to guess the ages of Filipinas.  Some of the 20 year old ones look like they are only 12, so I just look and never touch.  She is another camera shy Filipina.  It seems that we get a lot of those around here, but all the ones on the street are always posing for pictures.  Oh well, I did manage to get this picture, but I’m sure I can do better.

They bought pork chops at the market.  As you may or may not know by now, I do not like to eat pork much, but I did eat 2 of these.  Actually it was more like 1 1/2 because a lot of this pork was fat, and I won’t eat the pork fat (but I eat bacon..yeah I know it’s weird).

Today was one of those days that I didn’t bother looking at the clock when I got out of bed.  When I got up, I was ‘less than dressed’, the window was open and Cathy was outside washing up.  I was trying to get dressed before she ‘accidentally’ looked up and I just made it.  Right as I finished, she looked up.  She thought I was sneaking a peek at her, and maybe I was, just a little, but she was fully clothed, she was just using a basin of water to freshen up.

After I got up and made my morning CR trip, Lita had me working already.  I had to do the dreaded calamansi (small Filipino lemons) squeezing.  I did, I don’t know, it had to be over 100 of those things.  She uses it for one of the ingredients in her ‘secret’ BBQ sauce.  Before I did the calamansi though, I cut up 3 of the small onions, fried them up and cooked a couple of eggs on top of them.  I made a couple of sandwiches with that mixture.  It was good a normal, because of the seasoning that I have available to use that was special mixed by Lita.  The only thing I was missing was the tabasco sauce, but I can’t find any of that around here.  I’ll be sure to get 2 or 3 large bottles when I get to Tacloban next month.  We will definitely be going this time because we will be passing through there on the way back from Tambis.  Tambis has one of it’s festivals in March, and we always go to those.

Some of the things that I noticed people looking for, because I can check with the limited FeedJIT real time view, I have decided to give some answers to, somewhat anyway, just in case there are others that are looking for that information.  I wish I could afford the Pro version of this because I find it interesting to know what people search for when they happen upon the website.  It also shows other when they show up, which site they came from, if any and which site they went to from here, if any.

I wrote down 4 things that I wanted to respond to for those people searching.  The first 3 I will give answers to and/or provide website locations that I found some information about on the subject.

2.  Do they plan to build a Gaisano Mall in Catbalogan?  I guess this person is wondering why they would build a big mall in a smaller city than Catbalogan before they built one there.  Well according to this website:   http://en.wikipedia.org wiki/List_of_shopping_malls_in_the_Philippines#Gaisano_Malls – the answer to your question is No!  They are not scheduled for a Gaisano Mall or another other mall that I can find.  I guess you’ll have to be happy with Guiuan Shopping Center, Novo Department Store and Catbalogan Centro for now.  Maybe the people at this website: http://www.catbalogan.gov.ph/ – can give you a better answer.  That is the official website for the City of Catbalogan.

3.  Some did a search for Samar Provincial Hospital.  Here is a webpage that lists ALL of the hospitals in and around Calbayog City.    http://www.google.com/search?source=ig&hl=en&rlz=&q=Samar+Philippines+hospitals&aq=f&aqi=&aql=&oq=#q=Calbayog+City+Philippines+hospitals&hl=en&prmd=ivnscm&source=univ&tbs=plcs:1&tbo=u&ei=LFdnTcq-N8vIcc_EgI4M&sa=X&oi=local_group&ct=more-results&resnum=1&sqi=2&ved=0CC0QtQMwAA&bav=on.1,or.&fp=2ce4b7de8d5212a -hope that is helpful for someone.

4.  This is just an observation that I had when looking over the FeedJIT list.  Someone from Vastra Frolunda, Vastra Gotaland in Sweden, seemed very interested in all the Expat sites.  Hopefully they found what they were looking for.  If you are looking for something in an expat site and you don’t find it…ask.  We know lots of things, we do a lot of talking amongst each other and between us, I pretty sure we can come up with an answer pretty quickly.

Sorry if any of those things you have to cut/paste, I still don’t know how to make it come up with a link every time.  Also since I am typing this from a different format than I have been in the past, I would have to research more to find out about how to do that.  I will though, pretty soon.

Useless Knowledge: Plants that are dependent on bats for pollination include bananas, dates, figs, cashews, avocados, saguaros, organ pipes, century plants, cloves, mangoes, breadfruit, carob, kapok, and almost every tropical night-blooming species, including the mescal plant. That’s right without bats, there would be no tequila!  (I had no idea about this, but it’s something I will always remember now).

There are many beautiful pictures of Tagaytay at this website:  http://indangbeauty.wordpress.com/category/tagaytay-view/page/2/

Gen. Douglas MacArthur – Gen. Tomoyuki Yamashita
1945 – American colonial authorities in the Philippines hang Gen. Tomoyuki Yamashita, Commander-in-Chief of the Japanese forces during World War II, in Los Banos, Laguna after a swift, ‘kangaroo court trial’; United States Gen. Douglas McArthur had appointed a military commission whose rules he himself set and the charges he also himself drew up, with the body unsurprisingly finding Yamashita guilty of failure to discharge the duty ‘to control the operations of the members of his command’ and for supposedly even allowing them to ‘commit brutal atrocities and other high crimes’ against Americans and people from its ally and dependent countries; Yamashita denied knowing and permitting the atrocities perpetrated by the Japanese in Manila, with evidence even suggesting that members of the Japanese Naval Force had refused to heed his command to move out of Manila and that he really had no command over the same during the February 3, 1945 battle in Manila; it is said that MacArthur aimed at turning Yamashita’s trial into a showcase in the bid, apparently to cover up the fact that he fled Manila soon after the Japanese invasion in 1941; while Yamashita’s case will be appealed before the U.S. High Court, the decision of McArthur’s War Crimes Board will be upheld in a split vote, with Justice Ruthledge opining that it is “the worst in the Supreme Court’s history, not even barring Dred Scott”.

1947 – Philippine President Manuel A. Roxas and Manila Archbishop Michael O’Doherty formally sign an agreement whereby the government will acquired a total of eight estates owned by the Roman Catholic Church for the price of P5,630,000, with such estates to be sold later in small lots and at reasonable prices to the tenants; the agreement comes six months after the Philippines was granted “independence” by the imperialist United States following World War II; Monsignor O’Doherty will be the last foreigner and the second and last American to occupy the post of Manila Archbishop, having been assigned in September 1916, some two years after the last shots of the Filipino-American War (1899-1914) were fired and the Philippines “pacified” [Read: completely subdued] by the Bald Eagle nation. 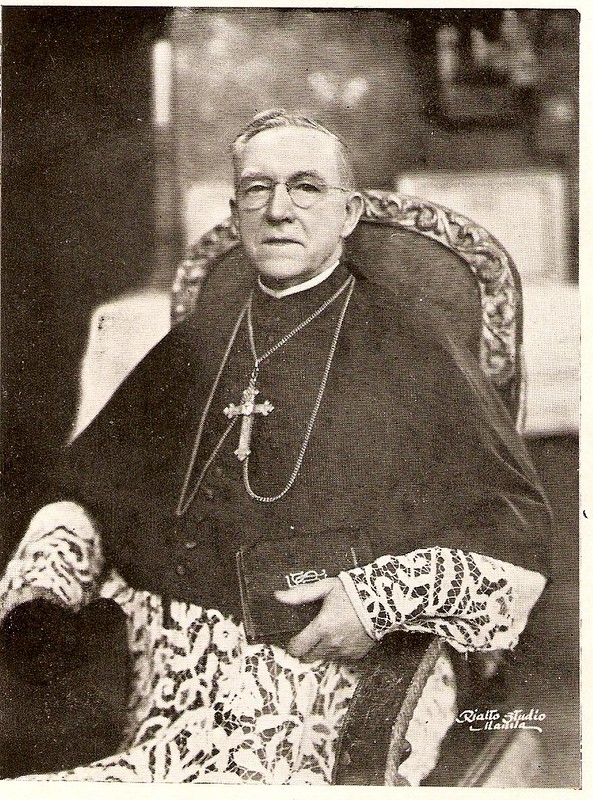 1862 – Filipino revolutionary General Edilberto T. Evangelista, is born in Santa Cruz, Manila during the Spanish colonial times; a civil engineering graduate from Belgium’s University of Ghent, he would be responsible for ably directing all the entrenchment and defense works of the Filipino revolutionaries, thus giving the Spanish colonial forces considerable trouble in the many battles during the Philippine Revolution of 1896; Evangelista will heroically perish during a battle defending the Sapote river in Cavite on February 17, 1897.