[smartads] Now normally I would not post a cafe on here that I haven’t tried yet.  Heck I haven’t even seen the building in person yet.  All I know about it is that it is in Tacloban and it’s a bakery, cafe and guest house.  This one is different though because I love the design of their building.  In fact it is my new dream house.  If we had enough money, this is how I would want our house built.  Our current house now would become the cafe and we would just live on the next 2 floors above.  Don’t you agree that this would be great?  Or not?  When we go to Tacloban, I’m going to look this place up and let them know how much I like their building.  I might as well get something to eat from their bakery and cafe, so I can give them a proper review, while I am there.  They use their building for guests and if you check out the website, you’ll see that the rates are very good.  The most expensive rate they advertise is P8000 per month ($182) (3 bedroom) for boarders and P3900 per week ($89) for guests (4 bedroom).  I guess the guest rooms are much like hotel rooms and the boarders are like apartments.  Maybe they will let me take pictures when I get there.  There are a couple of others, so if you are interested, check them out.  Or you can wait for me to get the pictures, it’s up to you. 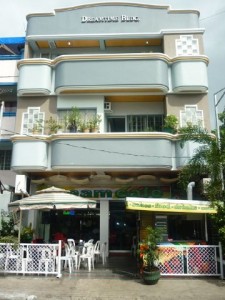 Useless Knowledge: A fart is a combination of gases (nitrogen, carbon dioxide, oxygen, methane, and hydrogen sulfide) that travels from a person’s stomach to their anus.  (Light ’em if you got ’em.  Isn’t this common knowledge?  Oh okay I didn’t know about the hydrogen sulfide)

This is an interesting site.  It is where I get a lot of my information about the Philippines.

One more before I start the post.  This site is a fellow expat site and he has a very interesting video of Philippine transportation.  If you’ve never been to the Philippines, be prepared to be a little shocked in a few places.  The overloaded motorcycle, boat and jeepney to name a few.  It is a trip, but it’s a way of life here and it’s doubtful it will every change very much.  You might as well check out the rest of Dave’s site while you are there, he has some good stuff.   Naturally I think my site is better, but I do read his site.

10 Feb – I was up and around at 1009 this morning.  It’s one of those things of getting up late because I didn’t go to bed until 0320.  I made pancakes this morning, but there was no syrup.  I just used some orange marmalade that we have.  I got 6 medium pancakes and 1 Precious pancake out of the batch today.  After eating those I made for to take my medication around 1045.

I noticed that one of the sites that people visit quite a bit is the KFC menu that I have posted from several months ago.  I didn’t know it would be so popular, so next time I’m in Tacloban, I will get a picture of the entire menu.  I might as well get one for Shakey’s while I am there.  I already plan to get a copy of and/or take a picture of all the menu’s at the restaurants that I visit around here that I will be added to the MJ Services Restaurant page.

Titing and Neneng are leaving on the 17th of this month for their Pepsi convention in Boracay.  They will be returning on Sunday, the 20th.  I offered to carry the luggage and take pictures for them in exchange for round trip fare, but Pepsi is paying for them and they can’t really afford to do that right now anyway.  Too bad, I’d like to be able to go to Boracay.  It is suppose to have the most beautiful beaches in the Philippines.

Mar, in addition to being my cousin is also my business partner in MJ Services because he has been to Boracay, Cebu and Bicol many times and has connections there.  We just haven’t had a chance to use those connections yet.  Some day we will, and we will be working extra hard to make that first group of tourist happy, so they will start spreading the news of our excellent service.

In addition to the brown sugar fried banana’s, I found out today that we also make banana bread balls (P3 each).  Basically it is fried banana bread.  It doesn’t sound really inviting, but I tasted one to be sure, and I liked it.  If you been reading this blog for any period of time, you’ll know that I am a picky eater.  It didn’t taste greasy at all, which kind of surprised me.  It looks like a giant round hush puppy.  I guess I’m going to have to try one of those fried brown sugar banana’s now.  I’ve been putting it off because of the fried part, but if it is as good as the other one, then it wouldn’t hurt to have one every now and then.

I made some new stew today.  In addition to the potatoes, carrots and onions, I added a can of corn (drained).  I ran out of Lita’s secret blend of spices, so I substituted some other blend.  A definite difference.  I think I found another bottle of her blend though (after I finished the stew).  I haven’t opened it yet to see if it is the right one, but I hope so.  Maybe in Korea we will gather the fixings for a new batch and ship them over here before we return.

11 Feb – Hits at 0200 were 122902.  Unfortunately today has been a pretty boring day.  I was up at 0754, but not bright eyed and bushy tailed.  I did get happier when I decided to put on a ‘new’ Dallas Cowboy shirt that I brought with me from Texas, that was too small for me.  It still had the tags on it.  I got happier, because it fit..in fact it was a little bit loose.  It’s a 2X shirt.  When I get the 1X shirts to fit like that one fits me now, then that will be about the time I need to stop losing weight I think.    I figured it was really probably too hot to wear it today, but I just had to try it on to see how close it was to fitting.  I didn’t expect it to fit so well.  I was right about it being too hot to wear.  I ended up taking it off about 4 hours later.  It’s hanging on my closet door right now.  This is a picture of the blog I am typing now.

Did you notice the last line of the blog in the above picture?

Lita and I were having a big ‘debate’ on the price of the Nissan rental.  I had it listed at P3100 per day and she said that others renting their large vehicles get more like P3500 per day.  We finally comprised on P3300 per day, plus gas.  We agreed that if the price was a little bit lower than normal, then people would choose us over the others.  We shall see if that is true.

You did have a brown out today.  It’s the first extended one that we have had for a little over a month.  It lasted from 10:16 this morning until 4:46 this afternoon.  It’s been cool recently, but today was hot, so that is why they probably decided to have the brown out.  Of course AFTER the lights came back on, it got cloudy and it tried to rain a couple of times.  It didn’t really succeed in rainy, just some drops, falling gently on our head.

I just remembered that the other day when I was talking to the hotel manager, he told me that PacMan will NOT be coming to stay at the hotel this month.  I believe the excuse that was used was some kind of scheduling error.  Oh, well…so much for my hopes of having people hanging around buying BBQ and goods from LolyKat.  Actually that hotel manager and his boss, were here today eating lunch.  I wanted to ask him if he ever got a chance to look at my website again, but he was busy talking and I didn’t want to interrupt.  He did wave to me when he got here though, so he must remember me.  Guess I’m pretty hard to forget around here.

Juvic came by for a little while tonight.  I haven’t seen her in about a month.  She just lives about a mile away, but she’s 19 and likes to have a good time with her friends, so I don’t get to see her much.  I see her sister Grace (17) at least 4 or 5 times per month.  Maybe when she turns 18, I won’t see her so much either.

I don’t have anything else to put in today’s post, so I guess this is the end for the day.  I did get a lot of positive feed back from my new look picture that I put on Face book.  The same picture that I used as a feature photo a couple of days ago.  The one I took with my webcam.  That was good to hear.  I’m hoping for a bit more weight loss and getting to the gym soon.

Useless Knowledge: Speaking of choppers, Betsy Ross, the woman who designed and sewed the first American flag, had a completely developed set of teeth at birth. 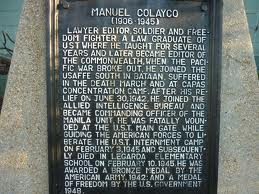 1945 – Manuel C. Colayco, Filipino “liberation hero” dies after an enemy hand grenade explodes in front of the University of Santo Tomas’ main gate where he was pointing out to his fellow guerrilla soldiers the strategic spots and important buildings in the campus; Colayco’s group was leading the rescue operations to free Filipino and Americans being held captive by the Japanese in UST during World War II; a lawyer, faculty member and editor, Colayco enlisted in the Philippine Army during the American colonial era and volunteered to serve in the first line of defense of Bataan when the Japanese occupied the Philippines when Pacific theater of WW II broke out; he survived the brutal Death March and was later released by the Japanese in Capaz enabling him to reestablish and head the 7th Manila Unit of  the Allied Intelligence Bureau in October 1942, and to publish the guerrilla newspaper “Freedom”; the guerrilla operation that caused him his life involved leading forces to Manila and through the gate of UST, with the prisoners in the University eventually liberated.