[smartads] Okay here we go.  Time to start what I hope turns out to be a great trip with lots of pictures, videos and some adventure.  It’s 0905 according to Lita’s watch and 0908 according to the drivers watch, take your pick.  The adventure has started already because according to the rules of DupTour, yes Titing decided to go with them instead of Grand Tours, women are not allowed to sit in the middle seat up front, next to the driver.  I didn’t officially find out why, but grabbing a knee versus grabbing the shifter came to mind.  She ended up 2 rows back, but next to Judith, so it’s not a problem.  Well not a problem for that, but she has the camera back there in the bag.  With all the gear shifting, stopping, starting, turning and bumps in the road, a steady video would be pretty much out of the question anyway.  I decided to wait until we got to Tambis and Catmon to take the videos because I probably would not have that much space to waste with my 4gb memory card.  I plan to take extensive notes just in case something goes wrong with the camera, as it has done in the past, or something else unforeseeable happens, at least I’ll have the notes to get the information out. 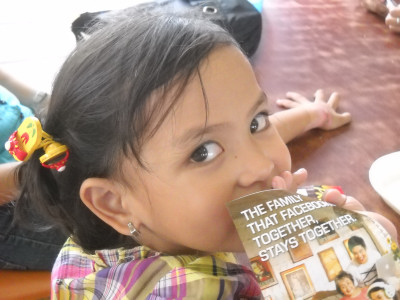 It’s pretty hard to even write with all the bouncing around, especially through congested areas where he has to constantly slow down.  Before we even got out of the Calbayog area, we stopped to pick up 2 more passengers in barangay Napuro.  I think that makes us full now.  We stopped in front of Gonying Store and the elementary school.  This van driver is super big on using the horn.  Although using the horn is a normal thing while driving here, this guy seems to be overdoing it in my opinion.

In Gandara (Ado’s hometown) I saw a couple of ‘white skin’ guys walking down the street.  There were probably American because they were both taller and wider than me.  We stopped at a DupTour station in Municipal San Jorge, barangay Santa Cruz.  One person got off and 1 person got on, so we’re still full.  This area of the trip is full of curves in the road.  I suppose it’s been like that all the time, but I never really paid that much attention to it before.  I wonder how many more curves there are on this road, probably a lot.

In barangay Pupua there was a coconut bouncing down the road towards us.  The driver had to swerve to miss it.  I’ve got no idea where it came from because there are coconuts everywhere around here.  It probably fell out of a tree and starting bouncing our way.

We arrived in the city of Catbalogan Samar around 10:30.  Coming into town we passed Bayview Inn.  They don’t have a website that I can find, but there is some information on it here along with a few other hotels in the area.  We stopped close to another hotel, the Summers Garden Pension House which is also just inside the city limits.  Our next stop was at the Catbalogan station.  We were here for approximately 30 minutes. 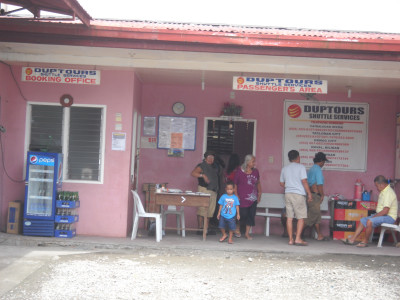 Here are a couple of pictures of things across the street from the DupTour Station. 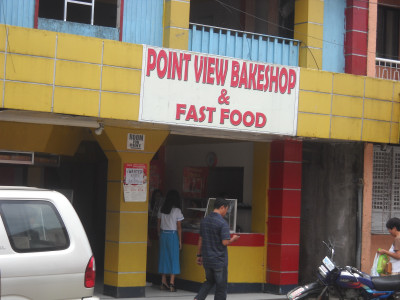 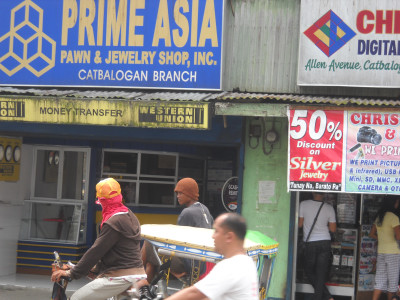 While I waited in the van I had to endure some Rap Crap on the radio and the little boy in the back decided to lean over the seat and drop doughnut crumbs all over me.   That’s him the the picture above of the DupTour Station.  The one in the blue shirt.  Evil looking isn’t he?

And one more picture of the immediate area before we continue on our journey.  This is outside the terminal area to the left. 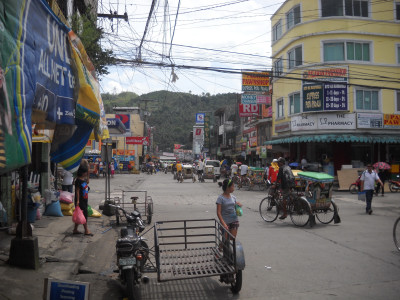 Okay it’s time to leave Catbalogan.  That ‘cute’ little boy is now standing up behind the seat where I am sitting, just as he was before, but now he doesn’t have a doughnut.  Since we have left the station he has been standing there talking to himself (I guess), trying to sing every song that comes on, sniffing, touching me and hitting my seat.  Just overall bugging me.  He seems to be traveling with his Lola (grandmother) and Lolo (grandfather), but neither are paying him any mind.  I told him to sit and gave him a dirty look, but either he doesn’t understand or doesn’t care.  Is it worth looking like the ‘bad American’?  I tried leaning up against the door and blocking him out, but he wouldn’t shut up.  It got so bad that I wished the door I was leaning against would open up and I would fall out.

In Calbiga, Samar we dropped off one person and picked another one up about 20 feet later.  I’m telling you if you have the money to start a van service here, it could just be something to consider.  Seems people need rides everyone around here for the longer distances and can not afford their own cars.

That little boy is now sitting with his Lola and being quiet.  I hope he stays there and maybe even goes to sleep because I wouldn’t do well in prison around here.

Around 1:30pm we switched vans.  Bye-bye little boy.  There is no a/c in this van, but it’s not hot outside and no little boy is bothering me, so things are looking up.  Now they are really looking up, it’s time to eat (finally).  We stopped to eat at a place called Andoks.  Personally  I was hoping for a name I recognized, but I’m not driving and I don’t know the area.  The feature picture of Fay is from Andoks and here are a few more. 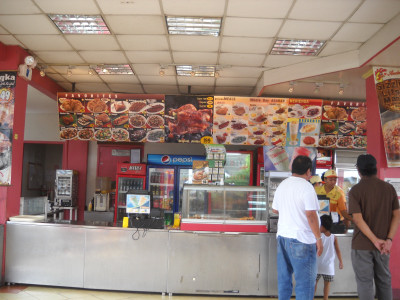 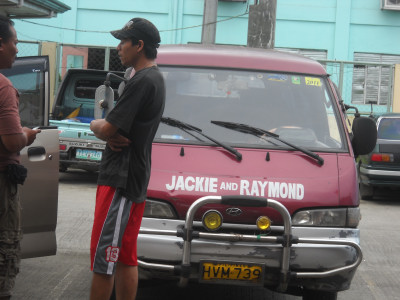 Van we switched to after Catbalogan 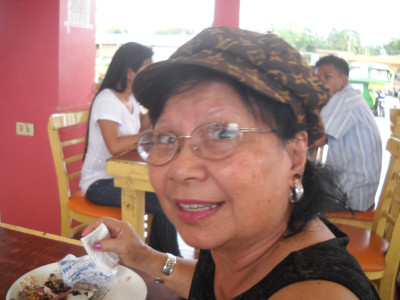 I have 4 or 5 other pictures at Andoks but I’m going to save them for another time.

Finally around 4:45pm we arrive.  Instead of going straight to Tambis where we would be sleeping, they decided to go straight to Catmon.  They had to go right past the turn too.  I was really ready to get out of that van and move around.  It’s only about another 5 minute ride, so I endured it.

There are lots of people here and it seems that the party will be later.  When I say later I mean like 0400.  No, that’s not an error.  They plan to have the party at 0400 because it’s some kind of Philippines tradition.  When I asked different people about the tradition though, no one knew the answer.  It’s just the way it’s always been done, so they do it.  That means that when/if we ever do get back to Tambis, I will have to get up about 0300 to get ready to head back this way.

First thing I did when I got out of the van was take a picture of the Poppa’s house in Catmon.  Most of the people there I knew, but I still get stares and the camera hogs are always out. 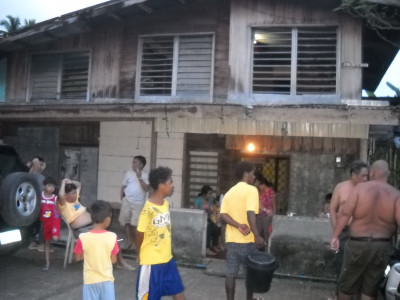 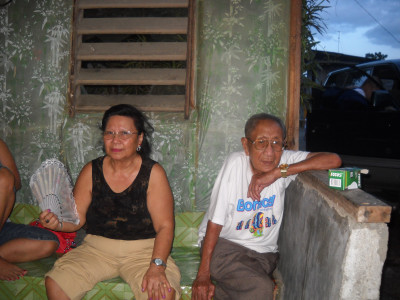 Jun (in picture of Poppa’s house, no shirt, facing you) was there and he told me that he reads my blog almost everyday.  He has even left me some messages on my Facebook account.  He already knows about the trip to Texas, the attempt to get a free ride, Red Pepsi and several other things.  I guess I’ll have to be careful what I write in here.  Hi Jun!  How’s it going?  Now what was it that I said you could bring me next time you come to visit?  Was it the coffee or the BBQ sauce?  Well either way, you can’t go wrong.  I’ll even pay you back for it, not a problem.

Just about the best thing that I heard since we left early that morning was Jhunnel (june-nell, or something close to that, he’ll answer)(in picture of Poppa’s house, no shirt, back to you) saying that he has 3 cases of San Miguel beer (SMB) for later.  I’ve got a feeling that I’m going to be needing a lot of it later.