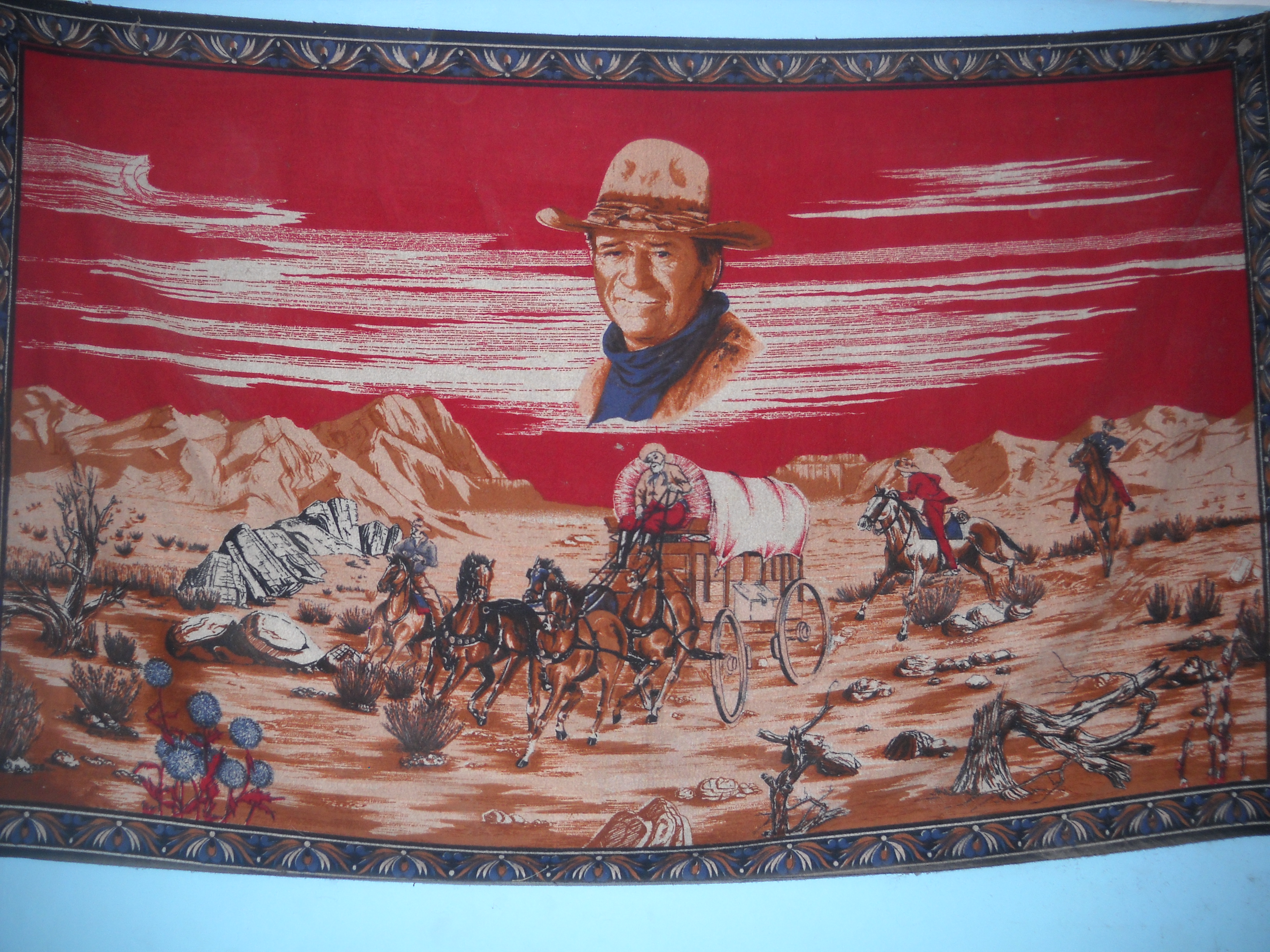 In the last regular post, I brought to your attention that we have a new worker for us.  Vicky is no longer here, but we have Pam.  Pam usually only works 3 days per week on Tuesday, Wednesday and Thursday.  On those days, she earns her P100 ($2.50) per day, plus some leftover food so she can feed her family and not have to spend much, if any, of the P100.  On at least 3 of the other days per week, she works for Neneng, but I’m not sure how much money she makes with her.  Probably about the same.  This post will be about the things that have been getting changed around here and about any immediate future plans that we have.

I’ll start with the computer room, since that is where I spend most of my time anyway.  All the balikbayan boxes that were in here have been emptied and gotten rid of.  I still had 3 left in here from when we first moved in.  Pam washed the Philippine flag I use for my curtain on the side window and I brushed off my John Wayne tapestry on the wall behind me.  Both of them where covered in dust.  It was easy to brush off the tapestry because it is on a solid wall, but the flag is on the window, so nothing to support the back of it.  Besides, I wanted to see which way would come out better.  They actually both turned out well, so next time I might just take the flag down and spread it across the picnic table and brush it instead, that’s faster and costs less (no water for washing it).  The had so much dust because of the concrete dust that gets to be terrible in our room and in here.

On Sunday, tomorrow, Victor is going to install some linoleum.  Lita purchased it today and it is blue and white in the shape of little tiles, but all in one big sheet.  After it gets installed we will not allow regular shoes on it, only slippers, and only one set of slippers per person.  Lita doesn’t want to get it messed up.  I think that is a little over board, but it’s okay with me. Pam swept the floor really good on Thursday before we left, but she will be working special on Sunday for us and will probably sweep again right before the linoleum is put down.

We also took one of the screen cabinets that we were using for pots and pans and put that in the bedroom at the foot of the bed.  We had too many clothes that were getting stacked up and ended up getting wrinkled.  There are only 2 shelves in the cabinet, but we use the top one for clothes and the bottom one for food that we don’t want to have in the kitchen area so it won’t get used unless it is us using it.  Our own little pantry.

Victor came in and sawed off the top shelf of our closet because my shirts were too long to fit in what was there without getting wrinkled on the bottom.  Now I have my clothes on the far right and Lita put her’s on the far left and the middle.  I also have to hang a few of my shirts that I like to wear on a regular basis on a nail on the wall next to the TV.  We plan to get one of those plastic chest of drawers they sell here, probably 2 of them.

Even though there are still 4 more balikbayan boxes in the bedroom to open and take care of, we did get the one from my side of the bed gone.  Right now Lita is using those 4 boxes as dressers.  Double stacked boxes and all on her side of the bed.  I now have a table where my one box was instead.  The table is much higher than the box was, so that is helpful for me in placing drinks there.  Plus it helps keep the bed from continually sliding to my side.  It doesn’t stop it, but it doesn’t do it as much.

All the boxes and things under the bed have been taken care of.  It is now empty under the bed.  That’s the way we like it too, so I hope it stays that way.  Pam actually crawled under the bed and pushed a lot of those things out and then when they were out, she swept under there, while still under there to make sure she got it all.  Now that’s what I call efficient.

We have 3 more balikbayan boxes on the way.  We shipped them while in Texas this last trip.  I don’t even remember everything in them, but I hope that when they arrive, we take care of them right away and not stack them up for later.  Sometimes ‘later’ is a long time.

Pam also clean up all the webs off the wall and ceiling with a broom.  Well she got all the ones she could reach.  She couldn’t get above the TV in the corner, but I got it.

Things are still a bit crowded here because we had so much stuff shipped over, but it’s starting to shape up.  We hope to have it all completely organized pretty soon.  Next month I will be getting a new power supply and surge protector to meet the Philippine standards, so I will not be needing the transformer anymore.  That will clean up some of the computer table and have less wires laying about.  I’d gladly give up this ‘table’ I have using as a computer table for an actual computer desk and she could use this table for whatever she needs, someplace else.

Well that’s what’s going on for now.  I’m sure that things will change, they always do.  I will try to keep you abreast of any changes and I will take pictures of what it looks like after it all gets into place.

The biggest thing out of all this for me is to get that linoleum down.  I am so tired of all this concrete dust.  It accumulates so fast and has to be swept too often.  I also fear that it will harm my computer and make it even more messed up than it already is.

2 thoughts on “Cleaning and Rearranging for Efficiency in Progress”